Bram Stoker: If Your Vampires Are Sparkling, You're Not Doing It Right

Perhaps it was the picture of Robert Pattinson in my last post, but this week’s cameo is all about Vampires. Actually it’s about that amazing grand-daddy of vampires: Bram Stoker. (Bram? What kind of name is Bram? It’s short for Abraham. Don’t be mean.) 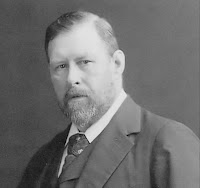 Bram Stoker wrote the original 1897 novel Dracula, from whence all later vampire novels and movies have wended their sparkly way. Actually, this isn’t entirely true – before Stoker’s novel there were other vampire stories, but his was so incredible that everyone everywhere just said Hells yes! This is how we’ll all think about vampires from now on.
Now, if you haven’t read Stoker’s work yet, put it on your TBR list. Wa-a-ay up there. Because, while it is written in that fairly unfashionable epistolary style (diary entries and letters), this is a work that packs a punch. It’s actually scary.
There are scenes in it that will give you chills, as long as you’re paying attention. Parts of it are like... well, remember when you first read The Shining? And there’s that scene, where Jack is out walking in the desolate hotel grounds, and there are all those topiary hedge animals, and out the corner of his eyes he sees....
Oh golly. Give me a second.
Anyway, that’s a scary-ass scene. I can’t even remember whether they put it in the film adaptation, but I don’t think they could have made it as scary as King wrote it. And parts of Stoker’s Dracula are like that.
A little about Bram Stoker
Stoker was born in 1847 (making him 50 when Dracula was published). He was involved in theatre for much of his early life, first as a critic and later as the acting-manager, and later business manager, of the Lyceum Theatre in London. He travelled a lot in those roles, although never to Eastern Europe. "Write what you know" be damned, eh?
Stoker was a distant relative of Sir Arthur Conan Doyle, and a fan of Walt Whitman in particular and Americans in general. One of his most heroic characters, Quincey Morris, is an All-American fellow (he proved his heroic status by dying a spectacular and noble death, while avenging his beloved).
OK, back to Dracula
Stoker researched for several years to write his definitive vampire novel. Originally entitled The Un-Dead (thank heavens for working titles), the book’s name was changed at a late stage to Dracula. It has become universally renowned for bringing a new consciousness of vampiric literature to the gothic-loving Victorian reader.
A few statistics:
Body count, in order of grisly death:
Necks bitten, in order of smexy-ness:
And last but not least, Stoker wins a Steam&Ink award for introducing us to Abraham van Helsing, who comes across as quite bookish and nerdy in Dracula, but in the ensuing decades has rocketed up the charm spectrum, to turn out like THIS:
Posted by Charlotte Jane Ivory at 2:30 AM

One of my favorite novels of all time. And hey, I like the bookish and nerdy type... ;)

Have you read The Historian? Definitely vampires for bookish nerdy types...

Actually, I have a huge soft spot for the bookish and nerdy type too (being one myself)! But, you know, Hugh Jackman...!
Jess, I haven't read The Historian yet! Thanks for the recommendation - it's now on my TBR list.

I haven't even read Dracula yet. I suck!! lol

One of my very, very favorite novels and authors. I even when to Whitby in Yorkshire to visit the ruins. It's such a creepy place. Thank you Charlotte for commenting on my blog. I'm thinking seriously of writing something paranormal, supernatural now. I think it's my proper genre. I didn't know The Historian was about vampires - I'll check it out too.
Great blog. Congratulations. I love this post.

Lauracea, welcome to my blog! There's nothing quite like visting, and being in the place which inspired the author, is there?
@Trisha, I have tracked down a free download of Dracula for you (from Project Gutenberg). Here's the link: http://www.gutenberg.org/ebooks/345 . Enjoy!
~ Charlotte

Wow! I'm so glad you posted this...I'm actually off to read it right now, as it is yet another I have missed...

I had no idea Dracula was an epistolary novel. Every since Humphry Clinker (or is it HumphrEy?), I've avoided them like the plague. (Picture a body, writhing and twitching on the floor at the thought of reading another epistolary, screaming "Struck by lightning, struck by lightning!" like what's his name in The Hobbit, only female and sans hairy feet.)

Guess I'll just have to throw caution to the wind. And what a fantastic body count...I feel terribly lacking now in my number of dead characters...lol.

I enjoyed Dracula, even if I had to turn off my PC sensor (a little misogyny, anyone?) and allow for the lack of modern medical knowledge (the rough-and-ready, unbloodtyped blood transfusion would have killed Lucy anyway). And Dracula being slain with a STEEL KNIFE at the end, when it had already been established that a wooden stake (as Buffy would say, "Say hello to Mr. Pointy.") was needed...

But it's easy to see why Stoker's Dracula, the seductive monster, set the mold forever after (with the occasional sparkly exception).