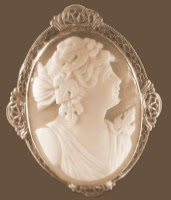 Welcome to Thursday’s Cameo, where I introduce an esteemed (by me) personage of the Victorian age. Be they hero or fiend, these are the people who captured the spirit of the age – the Victorian zeitgeist, if you will. (And I will: zzzzzeitgeist. I might use that again some time...) 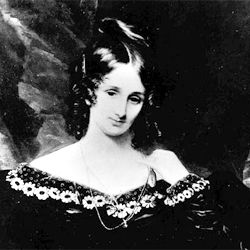 Mary Wollstonecraft Shelley
Introducing author, poet, philosopher and scandal-maker Mary Shelley...
Mrs Dr Frankenstein
By far most famous of Mary Shelley’s work is her Gothic novel Frankenstein: or, the Modern Prometheus.
The popularity of the book, based as it was on galvanism and occult themes, had a lot to do with the early 19th century zeitgeist (see what I did there?).
The early Victorian imagination was fascinated with pseudo-science, and like Michael Crichton novels today, many of Frankenstein’s readers would have been turning the pages, saying, gosh, this could really happen!. (Remember, this was the same age in which people could intelligently discuss Darwin’s theory of Evolution, but still passionately insist that fairies were alive and well and living at the bottom of the garden. Yes, I’m serious.)

Apparently the Frankenstein idea was dreamed up while Mary was on holiday beside Lake Geneva. In a waking dream, she pictured a student working life into a ghastly-looking creature he had put together from body parts. (Be aware, Gentle Reader, that not all Swiss lakes are so fertile for the imagination: I slept a night beside Lake Zurich, and the only thing I woke up with was a hangover.)
But, but, but... she’s a woman!
Shelley’s Frankenstein was first published anonymously. Many critics didn’t like it; the Quarterly Review in describing it as "a tissue of horrible and disgusting absurdity." But the Edinburgh Magazine and Literary Miscellany hoped to see "more productions from this author." (Apparently they liked their tissues horrible and disgusting.)
The public, on the other hand, loved it. It became well-known through theatrical adaptations, and was translated into French.
Once it became known that the author was *gasp* an authoress, the critics turned a bit nasty. Apparently all the book's faults flowed from the fact that the writer had ovaries. Remember, this from the same folks who believed that fairies lived at the bottom of the garden.
It was, admittedly, unusual for a woman to be as widely-educated as Mary Shelley. This was surely because of her background: her father was political philosopher Willliam Godwin, and her mother the famous Mary Wollstonecraft, an early feminist and the only woman to be included in Philosophy: 100 Essential Thinkers. (Sorry, all you other lady philosophers: you’re non-essential.)
Scandal
Really, you weren’t a true artiste in the 19th century until you’d nicked someone else’s bloke. Mary Shelley went on holiday to France with her stepsister, and the poet and philosopher Percy Bysshe Shelley. Percy Shelley happened to be married, but you know, what goes on tour stays on tour. Unfortunately, in the 19th century the phrase “what goes on tour stays on tour,” was yet to be invented, because Mary came back home pregnant.
Naturally, back home in England, that went down like the yet-to-be-dreamed-up Titanic. The pair were ostracised from society, and tragically their premature daughter died. When Shelley’s beleaguered wife committed suicide, the lovers were free to marry, which helped them to get back into society’s good books.
Posted by Charlotte Jane Ivory at 1:21 AM

Wasn't the year she wrote that supposed to be all jacked up weather-wise because of some volcano or whatnot? I can't honestly tell you where I'm remembering this from, but I thought the whole winter was supposed to be awful in general, plus with, you know, "omnious clouds" and such, lending to many of the scenes in the book....dang, I can't tell you if I'm just making this up or not, since I can't remember...lol...fat lot of good I'm being, eh?

Oh yeah, and Young Frankenstein was just on two nights ago; have you seen it? (My first watch!) I'd love to get my hands on a screenplay version of it so I could read and compare it with the original. *sigh* What a lovely, dorkish evening that would be. lol

Oh, interesting! I didn't know about that. Do you think it was the whatchamacallit volcano in Iceland which erupted again in 2009? I could absolutely see how that would lend a gothic air to Europe!
I have seen Young Frankenstein, but only when I was very young. I remember laughing my butt off at some of the gags :)

I went and looked it up (curiosity killed...time...lol)--they went to the lake during the "Year without a Summer." Apparently Tambora errupted and threw everything into a long ashy volcanic winter, tons of people all over the world died, lots of ice and red ashy clouds everywhere; that sort of thing.

But what great gothic writing conditions!