Writing the Compelling Female Character - that people want to read

This blog post featured as a guest post on Natasha Bennett's blog. I thought I'd revisit it for those who missed it the first time.

Dear Aunt Charlotte,
I don't get it. My female protagonist is super-sexy, has ninja fighting skills, and can shoot a man between the eyes in the middle of the night at fifty metres. But my readers keep telling me she's "one-dimensional". I don't get it - she has an ENORMOUS rack.
Signed, Frustrated Author
Dear Frustrated,
Your readers are being entirely unreasonable. As any one who's watched modern movies knows, superhuman gun skills and a gargantuan bosom are equivalent to a personality. However, if you want to buckle to this kind of tree-hugging pressure, check out these tips below. (Or have her wear more makeup. Whatever.)
Aunt Charlotte

One of the toughest challenges for an author is to create strong characters. While we writers easily create whole new worlds, magic systems, parallel dimensions, and even alternate histories, populating these places with well-rounded, multi-faceted characters can often be just an eensy bit out of reach. 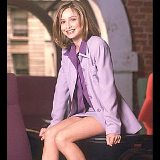 This is especially so with female characters, because we are so often presented with very characterised images in mainstream media. For example, here are a few female image stereotypes that might be currently hard-wired into the reader's brain: Young career woman who wants nothing more than a pay rise and a pair of Jimmy Choos; Angry, ass kicking Lara Croft type; Dizzy blonde bimbette; No-nonsense, prudish, uptight librarian/law student super-brain...
Because these stereotypes are so recognisable, readers respond quickly to the clichés that suggest them. So if a story starts with:
Damn – I’d broken another nail. I wondered if I had time before drinks at the Malibu Bar to fit in a mani-pedi – perhaps if I skipped lunch...
...the reader’s mind starts connecting with the young career woman type.

The trouble is that as writers, we’re trying to create people on the page – not types. I mean, when was the last time someone said to you, “I’m just your typical middle manager buying a red sports car to ease me through his mid-life crisis”? Not likely – most people will go out of their way to remind you of what makes them an individual. And why? Because individuals are interesting; types aren’t.
Most writers I know do not set out to create a type when they’re writing a female protagonist, or female secondary character. We want to create a compelling female character (CFC, if I may shorten it). But you know, we’re only human: we get lazy sometimes.
Being the eager-to-please bunnikins that I am, I’ve compiled a list of prompts to help you avoid the cardboard cut-out female, and instead breathe life into a fully-fledged CFC that readers will relate to and like. The list is by no means exhaustive, but will hopefully get you thinking about all the many and varied depths of your own CFC.

1. Make her realistic and let her dream.
Perhaps these seem mutually exclusive, but they’re not. After all, you’re realistic, aren’t you? And you have dreams too. So should your CFC. Give her all sorts of odd dreams and aspirations, not just those which fit neatly into your story (she doesn’t just want to find the Grindstone of Doom, she also wants to learn tap dancing). You don’t have to make a big deal of this in your novel – it may not even find its way in – but just knowing this about your character will make her more real to you. If she’s real to you, she’s more likely to be real to your reader.

Finally, dear author, if you feel your female character may falling back into cliché territory, get some inspiration via this YouTube video: Joss Whedon, the creator of Buffy the Vampire Slayer, answers the question “Why do you write such strong female characters?”

Email ThisBlogThis!Share to TwitterShare to FacebookShare to Pinterest
Labels: So You Want to Write a Novel

Fabulous entry! I wasn't sure how you'd keep the momentum you built in that first letter, but you did. ;)

I'd like to say more, but it's time to rescue the little one from his bed. Hopefully I'll get a chance to revisit this.

Hey Charlotte, I have something for you over on my blog, come and claim it :) http://sassy3421.blogspot.com/2011/04/and-versatile-blog-award-goes-to.html

Yes, yes, YES. All of this. Thank you for writing this fantastic post!

Thanks for the comments! This post was probably *way* too long, so thanks for making it all the way through... Hope you enjoyed the Joss Whedon video - that guy is so cool.

I love interesting characters in general - and the more little personality quirks I learn about, the more interesting they become!

Yep - I love me some quirkiness :)
I think readers can instinctively spot a "cardboard cut-out" character, even if they won't necessarily verbalise it. They'll still feel something was a bit "off."

Nice. I struggle with writing characters of the opposite sex (to me) but the advise is always the same, make the real. Great list!

Thanks ralfast, glad you found it useful. I think we all struggle to write characters who are outside of our own gender/race/culture, but striving to do it right is what makes us better writers... and (dare I say it?) people.

Illidan stunned the world. Can you tell [url=http://www.4dmv.com/montblanc.php]mont blanc refills[/url] cause? [url=http://www.4dmv.com/lv.php]cheap louis vuitton handbags[/url] 've Seen the most special children, [url=http://www.4dmv.com/cl.php]christian louboutin shoes[/url] I believe you must have their own reasons. Ningjia Er Sui kindly facing Illidan said. [url=http://www.4dmv.com/inc/burberry.php]burberry bags[/url] Do not want to go. Go to the frozen mountains are completely justified. Own mind yet Dacheng. Completely can not do like on I rely on the mind to control the body, to observe elements of the flow of energy, the most direct consequence is that the body can not keep up their own consciousness, unable to grasp the energy fluctuations fighter in the battle.But wait until the mind culmination of their own can take off the blindfold, to touch it with your eyes returning to the sun. Previously unseen colors, in this world all make it up! Well, child, you do not know you are the wayward young children or other reasons really, since you do not want to go, then [url=http://www.acelg.org.au/top.php]nike shoes[/url] not force you. You have two years to change his mind. Within two years, if you are interested, you can let your father notification cheap nike shoes . Ningjia Er Su then turned her head to Hebrew, say good-bye and said: Lord of adults, before leaving you want to say to you, cheap nike shoes before the commitment is still valid.